On my block there’s a red house, green house, a blue one and burgundy one.

On my block there’s Maria, Noah, and Yolanda.

Maria’s house is the first one on the street.

When I walk past red and a fence of shrubs, there’s the faint sound of amicable conversation from inside, the words are unrecognizable to me but I find the chatter lyrical. It reminds me of when the talking at the back of morning bus rides, sometimes too loud for 6 am on a Monday morning, slip into the language and though the words are just words without meaning to my own ears, I find myself listening anyways. It also reminds me of Maria’s giggle when she tried to teach me once but my tongue refused to roll and my mouth seems just not want sound the way she does so gracefully. She shook her head and told me not to worry about it, creole was a hard language to learn and she herself didn’t understand it at times. No one is saying anything worth while anyways she says.

Red makes me glance down to my wrist to the black rubber bracelets that bounce on my arm. Most of them are simple bands but my favorite is the one intricately laced together with twine, white beads branded with letters embedded in between. Maria never remembers the name of them but she brings in a pouch filled with them, one for each of her friends, when she returns from vacation from Cape Verde. She proudly proclaims she made them herself under the guidance of her grandmother and “look, now you all have one just like me. Almost every Cape Verdean girl has them back there.”

Now, Yolanda is blue. She’s across the street and some houses down from Maria. When I walk past, I can’t understand the voices that travel through the walls either. Haitian Creole is just as hard for me as Cape Verdean Creole but when I see blue, I focus on the scents. It’s a plethora of spices and cooking meats with rice. I ask her what her family makes the next day at school and she invites me over to see. I help her and her mother season the pork for griot and peel the plaintains for banan peze. That night, Yolanda translates the gossip her mother speaks over the phone to her aunties back in Haiti. We try our hardest to keep our giggles quiet because her Uncle apparently fought in the market place over his goats.
Yolanda wears blue scarves, different from my friend Gianna, these scarves aren’t religious and she wraps it around her head like a beehive or sometimes she expertly ties the loose ends into a pretty bow; criss crossing that part over this part, tucking here into there. I go home later that night and practice with my own scarves. Coincidentally, we both show up the next day with our heads wrapped around with blue silk. Navy blue. Sort of like her house.

I remember when Noah moved onto our street. Years and years ago. Back then his house used to be a pale creamy orange. I don’t blame his parents for painting over it almost as soon as they came. That color shouldn’t even exist, I can’t imagine it looking good on anything. I met Noah a few days after the moving trucks stopped coming. He was introduced to my second grade class. He was too shy to speak when the teacher asked if he wanted to tell us about himself and seats himself timidly at our table.
Weeks later when Maria and I befriend him, he tells us he and his family moved from Vietnam; A country, he explains, in Asia. He says his house used to be near the ocean and he’s sad that the city doesn’t have an ocean and it’s too cold to go swimming but Maria tells him Brockton isn’t so far from Cape Cod and Nantasket Beach is only an hour away but unfortunately there’s nothing to be done about the biting cold waiting outside. “Though,” she says, “it gets really warm once it’s June. For now though you can play in snow. Have you ever seen snow, Noah?”

When June did come so did Culture Day. Noah walked into class in lime green. Yolanda proclaimed they were both wearing dashikis twirling in her own technicolored dress pattered with busy designs. But Noah said his was a Ao Dai that he wore to his mom’s wedding in Vietnam.

This fall, the blue house is empty now. Yolanda’s family started to pack up over the summer. I helped her fold all her scarves and throw out spices she didn’t need to take with her. She cries a bit as she drops them in garbage bags but I tell her California has just as many types of people as here in Brockton. She says it won’t be the same and I don’t reply because I can’t think of another place where practically the whole word lives together. Instead, I lighten the mood with a jest that she can send us fancy California bracelets to add Maria and I’s collection and then start a cross country culture exchange. She laughs at that tearfully.

The next day, the blue house is empty and quiet as I walk past but to me, there’s still the phantom smell of griot and banan peze. 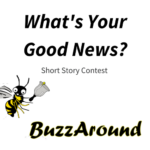