Brockton Fair Medals from the 1920’s, sterling and roughly the size of silver dollars. These are the only two of this type that I have ever seen in forty years of looking. These medals represent the high point of the expression of Brockton Pride through the issuing of medals. The practice began in the late 1800’s and reached a peak in the 1920’s. After the Great Depression the practice continued but to a lessor degree, usually the medals became smaller, less artistic and not silver. By WWII the golden era of Brockton Medals was over but there still was an occasional issue. To a some extent the issue of buttons replaced medals. 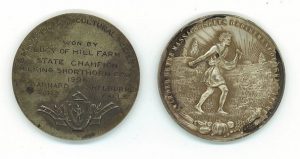 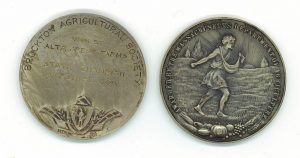